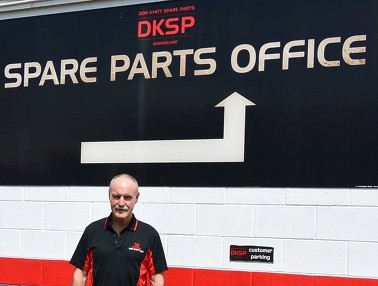 Ed Williams (pictured) started working for Don Kyatt Spare Parts in Melbourne in 1971. He took on a job as a motor mechanic and was 24 years old.

Forty-seven years later he sold his own business, DKSP (Qld), to Bapcor.

In 1979 one of the shareholders wanted to sell his shares on DKSP (Melbourne) and Ed bought them and ended up with a one third stake in the company.

“Shortly after that, in about 1980, Don Kyatt, Frank Hutchinson and myself decided to go our own ways,” Ed said.

“I got 75 per cent of DKSP (Qld) out of the deal while Ernie Hobbs still owned 25 per cent of this company. Later, I purchased Ernie’s shares to maintain 100 per cent ownership,” he said.

Ed always believed his business would grow from the moment he moved north to Brisbane, but not without hard work and determination.  The goal was to grow the business from the ground up, and Ed recalled many times when he had to help customers outside of work hours.

“I remember the times when I would leave the office and fit parts to a truck on the side of the road in pouring rain,” Ed explained.

Ed said it had been a long journey building the company and that he was extremely lucky that throughout his career he had good staff to help him.

“The culture created at DKSP (Qld) has been what has been the driving force behind the thriving business,” he said.

“We went to Japan and met with suppliers, and then had a bloke by the name of Brett McLean join us. Brett had worked in Mitsubishi truck parts, so that’s how we got involved with Mitsubishi.”

In 1994, Arnold Ritchie was in Sydney at a bus show. He called into I Know Parts introduce himself to the owner, Bob Carpenter. A few weeks later Ed rang Bob and asked if he’d be interested in selling him a share of the business.

“It was a good opportunity to gain some knowledge on Hino and Mitsubishi, to expand our parts range,” Ed said.

The one major disaster Ed was confronted by was the infamous 2011 floods. “In the 2011 flood the whole joint (Blackdown Street) was flooded out up to my neck,” Ed recalled.

“You’ve got no idea how bad that flood was. The whole phone system was down; we had no power, and everything was covered in mud.”

Ed said the flood resulted in hundreds of thousands of dollars’ worth of stock ruined.

“I didn’t want that to happen again, so in 2013 we moved to our present location in Ipswich Road, Rocklea,” he said.