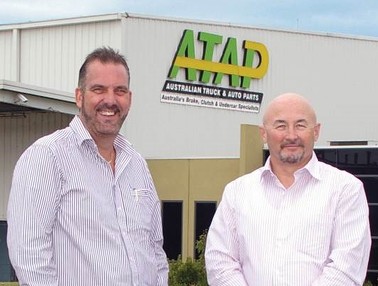 Alan Jolly (pictured, left) started his working life as an apprentice fitter and turner with PBR/Repco in 1974, and when he left the industry almost 40 years later, it was as a major player.

A catalyst to what was to follow for the young apprentice happened in 1979 when he met Graham Stewart, a man who was later to become his business partner for 27 years.

“Graham was the foreman at the PBR/Repco remanufacturing division,” Alan said. “We worked together for three months during my training and became firm friends.”

At the ripe old age of 26, Alan was appointed National Commercial Brake Sales Manager for PBR/Repco.

ABS was started in 1981 and by 1986, with the business taking off, Graham and his then partner, Les Clifford, offered Alan a job.

“I was doing very well at PBR, and rejected the job offer from Graham,” Alan explained.

“I suggested an offer of partnership was the only way I would come across.” And with an agreement reached, Alan joined Graham and Les at Auto Brake Service (ABS) and Australian Truck and Auto Parts (ATAP).

In 1987, PBR in Footscray Road, which was a large commercial store specialising in truck and bus repairs, bonding and remanufacturing wanted to sell.

“This was a great opportunity for us to move the business to larger premises,” Alan said.

In 1989, Les decided he wanted to pursue different interests and asked to be bought out of the business. This gave Alan the opportunity to become a 50-50 partner with Graham, a partnership that spanned 27 years.

And although it was a partnership, Alan and Graham had different priorities: Alan had ATAP as a priority; Graham was more involved in the day to day operations of ABS

This period also saw an upgrade to the manufacturing facilities in Footscray, which were now manufacturing boosters and valves to supply PBR.

ATAP opened its Western Australia operation in 1991, followed by New South Wales and South Australia in 1994.  All wholesale operations were running under the name of Brake Parts Australia.

ABS continued to expand, and by 1994 there were 20 franchises in four States. In 1996, the company got a major boost in size when it purchased Adelaide Brake Service off the receiver. There were 13 stores, but ABS kept only nine it regarded as viable.

In 1997 there were 40 Auto Brake Service franchise stores in five States.

ATAP Queensland opened in 1999 and finally, ATAP was truly a national distribution business.  With this, the wholesale division changed its name nationally from Brake Parts Australia (BPA), to Australian Truck & Auto Parts (ATAP).

The Protex brand was launched the same year. This ATAP “house” brand was to grow over the following two decades to establish itself as one of the leading names in brake, clutch, suspension, driveline, cooling and commercial components.

Alan said ATAP was dedicated to product development: “With our key staff, we travelled the world seeking world-class suppliers, and sourcing quality parts.

“We had product managers committed to each product range to ensure we were first to market with parts as new vehicles arrived on Australian roads.”

In 2001, Queensland ABS was bought, adding 11 more stores. The Protex/Daikin-Exedy clutch program was launched, and the company signed distribution agreements with Lucas/TRW and Tekonsha. In 2002, Darwin ABS opened bringing the franchise store numbers to 50.

Alan said that throughout the 2000s, the wholesale business also grew by acquisition: “In the late 2000s, we purchased Independent Brake Supplies - IBS, who had been a keen competitor for many years in the passenger vehicle brake market.

“IBS also had a distribution centre in each State, mirroring ATAP, so the decision was made to continue to run the business separately to ATAP.

“The reason behind this was we did not want to create a vacuum in the market, or leave space for any competitors to move in; we wanted to own the brake category, and saw this acquisition as critical to our goal.”

The business continued on with two more acquisitions over the next few years, including Garrmax, a specialist engine parts company based in Brisbane; and Melbourne Clutch and Brake (MCB), a Melbourne-based wholesale brake component supplier.

“Once again, we left these businesses as standalone and the administration and purchasing was integrated at ATAP Melbourne,” Alan said.

The acquisitions continued to boost revenue and purchasing power, which saw the group turnover and profit increase dramatically.

Being able to achieve continual growth throughout the business over the time he was there was a business highpoint: “This was very satisfying; particularly during tough economic times when we saw some of our opposition collapse.

Alan admits that when Metcash Automotive bought the business in 2013, he was unsure of his future, but decided he had a lot of living to do, and travel to catch up on.

To that end, Alan and wife Irene have enjoyed travelling the world since selling the business: “And we don't see ourselves stopping in the foreseeable future,” he said.