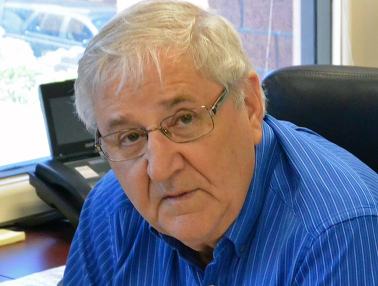 Mike Shoppee, founder of Bearing Wholesalers, has been in the bearing business more than 50 years.

It’s been a long road for the man who began his working life as an apprentice fitter and turner. Mike who was married for 47 years to his first girlfriend, Veronica, who he met in primary school, is best described as stable.

“I’ve been stable all along,” Mike said. “Success comes from sticking to the same thing: same girlfriend and wife. And I’ve been in the same business virtually since I started work, with the exception of an apprenticeship in fitting and turning.”

Stability aside, it didn’t take Mike long after he finished his apprenticeship to go into business.

“In 1969, I started to trade in Moray St, South Melbourne under the name Victorian Bearings,” he said. He left in 1977 and went to work for Central Bearing Distributors. When he left in 1984 he was the sales manager, having overseen the company’s expansion into several new outlets.

In 1985, Mike opened Bayswater Bearings and Oil Seals in a factory at the corner of Barry St and Holloway Drive in Bayswater.

“Bearings are ugly, so we do more than bearings,” Mike said. “To get people in we decided to do bearings, oil seals and automotive products.”

The 69-year-old might be winding down, but behind his wire rimmed glasses there is a sparkle in his eyes, and he bubbles enthusiasm for all things wheel bearings when he talks about the business.

“I started in Bayswater because of where I lived, and the business grew quickly,” Mike said.

Within two years of starting to trade outlets were established in Lilydale and Ringwood (1987). He bought Melton Bearings in Melton (1995); in 1996 he took over Darley Bearings in Bacchus Marsh, and then opened stores in Dandenong and Sunshine (1997). Next came West Melbourne (2001) and Thomastown in 2006.

The name change to Bearing Wholesalers was due to the realisation that it was too hard to advertise specials under several names.

Six years ago, Bearing Wholesalers opened stores at Geebung, Queensland (2009) and four years ago, at Wetherill Park (2011) near Sydney NSW.

Mike said that as the business grew his office staff included his wife, son and daughter.

“It’s been a family business all the way through,” he said. “My wife and I in the beginning, and as the children got old enough they joined us.

“My son Damian started out as a storeman and forklift driver in 1991.”

Mike said it was a big company for one man to finance it and grow. “There were no really, rough times,” he said. “In the beginning, it was okay. Then came the growth period in the early 1990s, when interest rates were over 20 per cent and even then, we didn’t feel it too much because we had cash flow. Overall, the business was smooth, and always made a profit.”

He credits his mother, Catherine, for helping control finances. She did all the accounts for the first 15 years of business, and taught Mike’s daughter Renee, who started in 1990, “to do the accounts the old-fashioned way”.

Mike is proud of being debt free. On the day of the sale to Bapcor, Bearing Wholesalers owned everything, including 43 vehicles had $10.5m in stock, 2500 accounts and another 1000 cash sale accounts, and a staff of 85. A major strength of Bearing Wholesalers is its catalogue, which is being constantly updated.

“Our automotive program has grown to include drive shafts, timing belt kits, trailer kits, CV joints and centre bearings, 4WD repair kits, and our wheel hub range is now up to about 850 sizes,” he said.

“We started out renting one factory in the six-factory complex at Bayswater, and we ended up occupying the whole complex, and I own them,” he said.

Mike said there are about 700 bearing outlets in Australia, but not everyone carries the whole range.

“We carry the whole range,” he said. “We have always taken pride in having the range and the stock and we look after industrial customers and automotive companies.”

When he decided to sell, Mike had three companies looking. “I wanted to sell to Burson. They were good to me and my family for many years.”

Mike’s relationship with Burson goes back more than 20 years. “As Burson grew, I grew,” he said.

Bearing Wholesalers has grown since Bapcor took over. Last year another outlet was opened in Cannington, WA and Mike said he looks forward to more, even though he is moving into retirement.