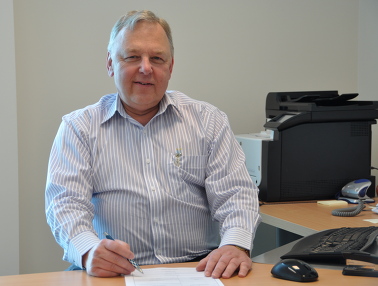 Andrew Schram is an enigma: a high achiever with a low-profile. Andrew played a pivotal role in the Australian automotive aftermarket industry, yet is unknown outside the industry.

The rise and rise of Andrew in the auto industry had its beginnings in 1971 when he left school and was indentured as an apprentice motor mechanic at a garage in Essendon. Back in those days motor vehicles had spark plugs, distributors and carburettors. After serving a four-year apprenticeship, Andrew changed tack and was employed as a service station manager, first at Keilor for 12 months, followed by another year-long stint with a service station at Gladstone Park.

The turning point in Andrew’s working life came about on February 27, 1977, when he went to work for Garry Johnson and his fledgling Burson auto parts business as assistant store manager at its first store in Braybrook.

At that time, Burson was six years into its development; a fledgling company in an automotive world dominated by Repco.

Andrew joined Burson with little sales or management experience, but rose to be a store manager, and then on to be director of purchasing and warehousing.

Burson founder, Garry Johnson, said: “Andrew was able to grow as Burson grew from handwritten invoices and a limited stock range to a substantial parts range and the introduction of computerisation of invoicing, purchasing and warehouse management as well as other processes.

“He developed a deep knowledge of the automotive industry and was a respected and popular president of the Australian Automotive Aftermarket Association, and played a significant role in many decisions I and Team Burson made on the journey of growth.”

Garry said Andrew was one of his right-hand men, along with Terry Penney, and when Terry left, Andrew became second in command.

In 1986, with 13 Burson company-owned auto parts stores, Garry Johnson acquired Ron Burgoine’s half of the business. It wasn’t a friendly buy out. Garry credits support from Andrew during that time as a contributing factor in Burson’s continuing success.

It hasn’t always been plain sailing. Following the buyout, in 1987, Garry attempted to float Burson on the Stock Exchange. The timing could not have been worse as the float was offered at about the time of the October 1987, share market crash. Consequently, the float was unsuccessful.

In 1989, Andrew took charge of moving Burson from its warehouse at 70 Dougherty Road to a purpose-built facility at 26 Dougherty Road.

“We were supposed to own the warehouse, but had to sell it because we needed money after the share market float failed,” Andrew said.

Nevertheless, for the past 35 years Andrew oversaw warehousing and auto parts range expansion and, at 61 years of age, he is “transitioning into retirement.”

Andrew said: “I went over to head office as purchasing manager. My role is stock management, warehousing, range and pricing.

“It’s the same job I’m doing here (at Bapcor); all that’s changed is my title.”

Talking about business Andrew, said: “Boring is beautiful; Burson has always been conservative in the way the business is managed.

“If we needed to be entrepreneurial, then we were. No-one else, in the trade, has been able to grow beyond half a dozen stores; as a private business, we got to 91 or 93 stores.”

“Supplier relationships was part of the reason we expanded to 90 stores. We’ve helped a few people out along the way but, at the same time, they’ve done what we wanted. We didn’t buy off a supplier because he was a nice guy; we bought because the supplier ticked the right boxes.”

Burson was sold to Quadrant Private Equity in September 2011. It is something of an industry legend that Bapcor managing director, Darryl Abotomey, who negotiated the deal, had to meet with Andrew’s approval before a final decision was made to sell.

As Darryl tells the story: “If I didn’t pass the interview with Andrew, the deal was off. It was an interview process and if we hadn’t seen eye to eye then maybe it (the sale) would have been a different story because Garry put a lot of store in Andrew’s opinion.”

Andrew described Burson is the “Jewel in the Crown” of Bapcor, and said: “I’m the only original Burson person left on management.”

But not for long. At the time of the interview, April 2017, Andrew was “transitioning into retirement”. He said he will continue to follow his passion, Essendon Football Club, something he described as a family event that involves Sharron, his wife of 37 years, and 34-year-old son Daniel.