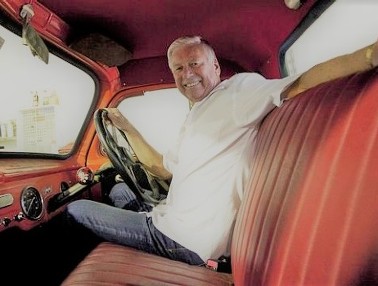 Garry Johnson, co-founder of Burson Auto Parts and owner from 1971 until the business was sold, is a rare breed in modern society: "I believe if you are advantaged in life, you have an obligation to give something back to society."

Garry described the rise and rise of Burson as “a journey of excitement, worry and achievement against lots of head winds. Most of all it was a shared journey, initially with Ron Burgoine and then for the greater part with Andrew Schram, Terry Penney and all at Team Burson.”

The Burson business started as an idea in 1971 between Garry and friend, Ron Burgoine. The two men thought they should be able to acquire a business at a reasonable price, and with Garry’s accounting skills and Ron’s selling ability, be assured of success.

“After a sustained search, we acquired the rights to the distribution of a range of automotive additives and chemicals for one third of Melbourne,” Garry said.

“Product education, marketing plans and cash flow projections all seemed positive, so contracts were signed and away we went.

“Ron had cash for his 50 per cent share, and I took out a second mortgage on my home. It was big risk for both of us.”

Garry said sites were established and sales began to happen at service stations and other auto outlets, however, with a limited range and regular weekly/bi-weekly call cycles, progress was slow. The range was expanded by the introduction of a line of car carpet mats as well as other selected lines including car parts.

After a short period Burson grew to seven cash vans selling on-site to auto outlets on a regular call cycle.

“Warehousing grew from a store underneath my Doncaster home to a 2000sq.ft, warehouse in West Heidelberg, on the corner of Mologa Road and Orthla Avenue. And then to a 5000sq.ft. warehouse,” Garry said.

Garry said the seven cash vans called on a regular weekly/fortnightly cycle, but we soon discovered that workshop customers required parts on call so in 1977 Burson leased a building in Ballarat Rd, Braybrook, and so began the chain of Burson Auto Parts stores. The next stage was to take the cash vans off the road and replace them with auto parts stores where customer requirements could be met within the hour by delivery vans.

In 1986, with 13 Burson company-owned auto parts stores, Garry acquired Ron Burgoine’s 50 per cent of the business.

“With the support of two senior directors, Andrew Schram, warehouse/purchasing, and Terry Penney, sales, each having 5 per cent shares in Burson, the journey continued.

A major hiccup occurred in 1987 when Garry attempted to float Burson on the Stock Exchange. This was about the time of the October 1987, share market crash. The float was unsuccessful. Garry’s idea was to move away from expansion by debt, to expansion by equity and to include employee shares.

“The focus of Burson was predominantly trade with retail making up about 16-20 per cent of the business,” Garry said.

Team Burson was on a roll. In 2005, with a strong customer focus and a dedicated team, auto store numbers grew to 58 in four States, turnover at $150m and about 600 employees.

It was a decision Garry described as sad and emotional: “I went through a lengthy sale process but an acceptable purchaser proved elusive.”

Garry was having conversations with Darryl Abotomey, an associate and ex industry executive, and told him he was struggling to find a buyer. Darryl indicated that he was interested in putting forward a proposition with him as managing director and a financial backer, Quadrant Private Equity.

An agreement to acquire Burson was signed on Friday, September 16, 2011 and announced on September 19 when, in keeping with his open management style, Garry sent out another memo to inform all Team Burson staff. The $148m sale was completed on October 17.

Garry remains a major shareholder of Bapcor. He now has more time to pursue his passions, other than Burson, enjoying travel and other activities with his wife, Margaret, and being involved with, and proud of, daughters, Adele and Monique and his six grandchildren. These days Garry swims with various groups, is a regular “but average” golfer, loves the Western Bulldogs and manages his investments, including the Johnson Family Foundation, which gives to charities of choice of family members.