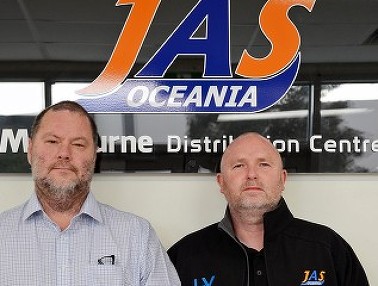 JAS Oceania is a trade supplier, selling to specialised auto electrical and air conditioning workshops. The company was the brainchild of three auto industry stalwarts: Nick Hollings who retired in April, 2017; 52 year old Steve Douglas, who is marketing and product manager; and, 53 year old Graham Bonney who takes care of distribution and sales.

All three men were senior executives at Ingram Corporation where they worked for more than 15 years. Nick and Steve had been shareholders in Ingram following a management buyout from Amcor in 1993.

Steve said Ingram Corporation is now Ashdown Ingram and owned by US based Genuine Parts Company (Repco) after being sold to Repco in 2004.

“In early 2005 the three of us got together and started hatching the idea of starting a business,” Graham explained. “We were looking for an equity partner, which at the time was Natrad.”

Graham said when JAS Oceania opened for business in 2005 it was a 50-50 partnership between the three partners and Natrad. “Seven months later Natrad was bought out by Adrad Group, a national radiator supply company,” he said.

“When Natrad was bought out, we purchased the company’s 50 per cent holding and then in 2006 a fourth person, Bob Daley, former chief financial officer at Natrad, came into the ownership of the business as a substantial shareholder.”

“The original concept of JAS was to build the business around what we called Japanese alternators and starters product range,” Steve Douglas said. “We added the name Oceania, so we could get registered. There was already a JAS Australia”

“And as we started the business we had a lot of suppliers come to us, so we decided to go into a full range of auto electrical. We then made a starter motor, alternator program, a lighting program, and accessories program and an air conditioning program.”

“The three of us spent three or four months working on product and getting product available, because obviously with overseas product there is lead time,” Steve said.

The business started off September 2005 in a 1000sq.m building in Western Avenue, Tullamarine.

“I think 14 or 15 people resigned from Ingram on the same day, and these were people we had approached and knew from our Ingram days,” Steve said. “I mean, all of us had worked at Ingram.”

Hellaby Holdings made an approach to buy the business in 2014. “The deal went through in June 2015 and we became part of Hellaby Automotive,” Graham said.

“We hadn’t thought about selling the business, but Hellaby came to us with an offer that was suitable at the time.”

When Hellaby took over, everyone had to sell their shares and Bob Daley retired. Steve said Bob was a silent shareholder and never came into the office on a regular basis, but he was a big supporter, especially in their early days when they needed cash.

“In late 2016, Bapcor took over Hellaby, and we became part of Bapcor,” Steve said.

JAS Oceania had 17 branches when Hellaby took over, and opened another four branches under Hellaby. Since Bapcor took control, the company opened branches at Tamworth NSW, Bunbury and Wangarra in WA.

Not surprisingly, JAS Oceania’s main competitor is Ashdown Ingram which has about 50 or so branches. But JAS is catching up, having expanded to 25 branches and employing a 170 staff and still growing.