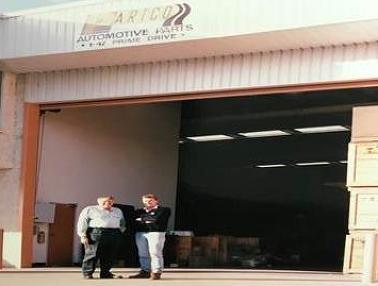 Going into business with a back-up plan makes sense. Multi-national food chain McDonalds does it by buying real estate, and so it was for Partco.

What is best known about Partco is that for 24 years, it was an independent company operating as a leading importer/wholesaler of automotive spare parts to the Australian reseller and suspension specialist market. What is not so well known is that Partco was an involved family enterprise that was also into real estate.

Chris Lane, former Partco managing director and New South Wales sales manager for Australian Automotive Distribution, was on the floor with Partco from the beginning. Chris was the ideal person to talk to about the company, how it started and the trials along the road.

“The company was set up with two arms,” Chris said. “Partco was the major trading arm, and a separate investment company was formed to buy and sell the real estate properties that we would occupy. A growing business and a real estate arm seemed like a good strategy.

“We would pay off our properties using the rent we would charge, then borrow money from the bank against the increased equity in the properties to grow Partco, so to that end both strategies were complimentary,” Chris explained.

Partco was incorporated in 1989 and began trading on February 5, 1990. Terry Lane with son Chris, and Jerry Lenstra, were founding directors of the business. Jerry’s brother Bob joined as a director within the first few years. Terry and Jerry worked full-time from the start, while Chris worked on the accounts part-time at night, catching the train from North Sydney to Seven Hills at the end of his working day.

Both Terry’s wife, Judy (Chris’s mother) and Jerry’s wife Lisa worked in the early hours of the morning re-packing water pumps for much of the start-up period as Partco became established.

Chris didn’t work full-time at Partco until August 1991. Prior to joining Partco, Chris was employed as a trainee bank manager by Westpac and studied accounting part time.

Terry and Jerry had a lengthy association before going into business together. Terry started Carparts (part of Capitol Motors) in the late 1970s as general manager, and in 1980 hired Jerry as his sales manager. Carparts was sold in late 1989.

After this sale, Terry and Jerry decided to leave and start up an importing business with Chris. Terry, who is 89 years-old, retired in 2003, and since the sale of Partco to AAD Pty Ltd, Jerry, who is in his seventies, works two days a week in product development for AAD.

“Terry had introduced GMB Japan, manufacturers of universal joints and water pumps, to the Australian market in 1978 through Carparts, which he had established as the non-genuine arm of Capitol Motors.

“GMB repaid their appreciation of Terry by offering Partco a direct import account, and in February 1990 the first 40-footer of universal joints and unboxed water pumps arrived from Japan. This was later followed by steering and suspension manufacturer, Transteering, who appointed Partco as their sole Australian distributor.”

The early 1990s were tough times for Australian businesses, and the Australian economy suffered its worst recession since the Great Depression. Chris said the company was nearly wiped out with a severe bad debt in the early years: “We had a container of water pumps delivered to a South Australian distributor who subsequently went broke, and that impacted on our cash flow.

“It really was the worst time to start a business the way the economy was,” he said. “High interest rates in 1992/93 made the banks wary of lending, so we relied on the goodwill of our suppliers to get through.”

In the early days, Partco set up a warehouse in Prime Drive, Seven Hills and later purchased and moved to Prospect Highway in Seven Hills. The company outgrew this warehouse, so they purchased a larger building in Girraween. As the business expanded so too did the need for storage space, so Partco, through their investment company, bought the adjacent warehouse.

Partco was purchased by Australian Automotive Distribution Pty Ltd, a wholly-owned subsidiary of Metcash Automotive Holdings Pty Ltd on December 18, 2013. After Partco was sold it formed part of AAD group of companies (Partco, ATAP, IBS, Garrmax), in the specialist wholesaler division of Bapcor.