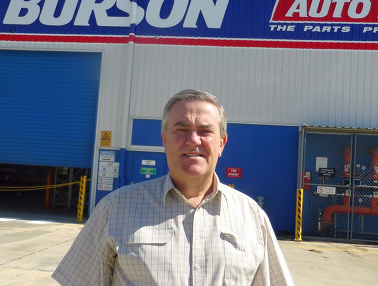 Precision Automotive founder and general manager, Rod Wilkinson is 59 years-old, and says he is not looking to retire anytime soon.

“I love the industry and am enjoying working for Bapcor,” he said.

“After 32 years of self-employment, this is a great business to work for; there is a camaraderie and great balance about the business I am involved in.”

As with many other auto industry managers, Rod learned and honed his craft in his teenage years while working for auto industry giant, Repco in Canberra. He stayed for 11 years before buying a food wholesale business, Midwest Foods based at Dubbo, New South Wales.

Four years later and Rod was back in the auto trade as a franchisor, selling garage equipment. He ended up owning three franchises under the company Garaquip at Dubbo, Canberra and Newcastle.

When he sold the businesses Rod moved to Queensland and worked for the company that owned the franchises he’d sold.

“I observed that I could probably do it better than Garaquip were,” he said.

“My background was sales and there was an opportunity in the Brisbane area as it was under serviced. In 1996 I started Precision Automotive, which was based around vehicle hoist maintenance and relocation.

“About 12 months later, with the business growing, Phil Atkins, my former partner in the Canberra franchise, moved to Queensland to come into the business with me.”

Precision Automotive started as a vehicle hoist maintenance company but grew into selling equipment, and then became a major importer of quality automotive equipment and services. These days the company sells world renown brands of equipment including Rotary Vehicle Lifts. As well, there is CEMB Wheel Service Equipment, Guiliano Tyre Equipment and a complete range of sundry workshop equipment.

Precision also developed its own national brand range under the Summit label. Precision Automotive opened its first outlet in Brisbane before expanding into Sydney in 2012 and Melbourne in 2014, and had distribution in Adelaide, Hobart and Perth.

He told Burson purchasing manager, Andrew Schram, that he had a product range better suited to Burson’s customer base than what the company was selling. Subsequently, Rod developed a range of products for Burson under the Summit brand.

Rod said the Summit brand grew dramatically through the Burson network, and Burson became 30 per cent of his business.

Precision Automotive was bought by Burson Auto Parts in February 2016, just prior to the name transformation to Bapcor. In July, 2017, Bapcor purchased a Melbourne-based manufacturing and engineering company, Tricor. The purchase gave Precision Automotive a bigger footprint in the Victorian market where the two entities are now called Precision Tricor.