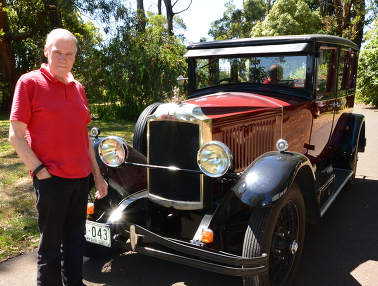 Born in December, 1943, Colin grew up in the Melbourne suburb of Heidelberg. Mild mannered and soft spoken, he started his working life as a primary school teacher before turning his attention to business.

In the late 1960s, Colin started Venus Sunglasses Pty Ltd, which he later sold. A few months later he bought the Sunoroid Sunglass company, built it up, and sold it.

Colin got out of sunglasses. He wanted to sell products without seasonal influence. To that end he looked at the automotive industry where wholesalers told him ball joints, tie rod ends and front-end parts were poorly supplied.

Camelot Design Industries Group Pty Ltd (CDIG) was formed in 1977, and then he found Trans Forward Ind Co in Taiwan, who made him their Australian agent.  The first orders were shipped and invoiced in December, 1986.

In 1987, Colin received a phone call from Andrew Schram (of Burson) asking: “Who is Endurance?”

Burson had received goods packed in Endurance boxes. At the same time, Jack Elbourne (Friends Auto Parts, Qld) received some of his shipment in Camelot boxes.

“The factory mixed up their packaging, which exposed their deceptive conduct,” Colin said.

A year later, Jack told Colin he was setting up his own factory in Taiwan, Transteering Ind Co. He would do range development and wanted Colin (CDIG) to be the Australian distributor, except for Queensland.

In January, 1996, Jack, Dale May and Chris Lane (NSW) decided that the Camelot brand would be discontinued. They would purchase direct from the factory in Roadsafe brand while CDIG would continue to supply the “nationals” under their own brands.

“This was disappointing for me after all the work for brand acceptance,” Colin said.

So, the Roadsafe brand was launched together with front end, and sales grew. Meanwhile, National Parts became dominant, and Jack, Dale and Chris grumbled about their loss of sales to National Parts in their States, and Colin’s benefitting from that.

The discontent with his interstate business associates escalated after Jack Elbourne died in 2005.

“The new managers of BCF in Qld (who retained a 50 per cent interest in the Taiwan factory) decided to allow Roadsafe (NSW) to approach ATAP in Vic for national sales. Previously this was the province only of CDIG,” Colin explained.

Colin put forward his case that the distribution agreement was being breached; interference with his customers was unwarranted, and the appointment of additional distributers would upset existing customers. This fell on deaf ears.

The factory fell into line with this, so he ended a 20-year exclusive association and changed suppliers to King Ting Ind Co (KT). A trial order shipped in April 2006, then orders for the others in July 2006.

Colin had reached agreement to buy Paja, with the sale due to be settled in May 2006, (Paja had recommenced business three years after he had purchased their assets in 1994 and developed a business like Roadsafe).

Meanwhile, Colin had been diagnosed with prostate cancer. By December 2005 the cancer had escalated. He was booked for surgery in March, 2006 and while at home recovering he agreed to purchase the two Paja buildings (Qld and Braeside).

National Parts collapsed in early 2007, and this proved a game-changer. National Parts was a major customer for CDIG, however, a major beneficiary was the new Roadsafe operation. Profits lost in indent sales for CDIG were more than covered by ex-stock wholesale sales by Roadsafe.

It was a far cry from 2000 when Roadsafe was at its lowest point, and Colin had to rebuild the business.

“At the time our customer base was being eroded by large companies acquiring independent resellers, and the vehicle market was changing as SUV and 4WD vehicles gained popularity,” Colin explained.

“By 2016, 4WD was 50 per cent of our business, and together with front-end, 90 per cent of sales emphasis was strategically reduced on previous supporting ranges, such as brake pads and filters, where we had no control on supply or distribution,” he said.