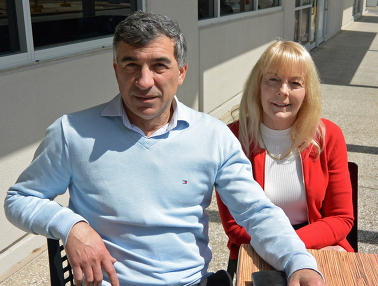 Sprint Auto Parts began as a single auto parts store in 1984 and subsequently grew into a multi-State network of stores.

The growth of Sprint goes back to the early 1980s.  In those days Sprint Auto Parts co-founder, Chas Calandro, was pumping petrol at a service station owned by Rick King.  In 1984, 28-year-old Chas was given the opportunity to go into the automotive parts business with Rick, purchasing a small trade-based store known as Spare Parts Supplies. It was a tiny, 200 sq.m showroom and office at 189 Bridge Road, Ingle Farm in Adelaide, which was immediately renamed Sprint Auto Parts on the takeover and transformed into a retail and trade store.

In September 1987, Chas bought out Rick’s share of the business.  To raise the funds needed for the buyout, Chas’s parents went guarantors on a loan for him to enable the buyout. “The deal was all hand written by Rick,” Chas said. “It was beautiful. He was like my second dad.”

After the buyout, Chas’s wife Julie, who was working for a real estate group, went to work at Sprint, and the pair spent the next six years building the business at Ingle Farm.

The early days were tough times in business. In October 1987, the share market crashed, and there was a recession in the early 1990s. There were business failures, bankruptcies, negative equity, falling investment and mounting unemployed.

This didn’t stop Chas and Julie. In the early 1990s their expansion continued, and a new store was opened at Holden Hill. Then in 1992 the Auto Parts store at Bridge Road, Ingle Farm location was relocated to a larger premise at 891 Main North Road, Pooraka, with the carburettor workshop remaining at Bridge Road and expanding to the whole of the premises.

The next shop was on Salisbury Highway in Salisbury.  In 1994, two more shops were opened at Darlington and Kilkenny.  By the end of the decade Sprint Auto had grown to 11 stores, and then the franchising began.

“Most of the stores were in metropolitan Adelaide, with a sprinkling elsewhere, including Broken Hill and Mildura,” Chas said.

Chas said the reason for the Sprint expansion, and eventual franchising, was that he was into motor sport racing – Sprint cars - and had engaged an American driver to come over and drive his car.

“His family owned a chain of music stores in Seattle, and he said to me: ‘Chas why don’t you just start another store somewhere else? Maybe add another two or three?’

“Even though we had opened 11 stores of our own, cash flow was always a problem, and we were always on the edge due to the expansion and we were struggling to pay our bills.”

Over time as business increased, Sprint Auto moved first to Pooraka then onto the Mawson Lakes Head Office and distribution centre.  Sprint now has 39 stores from Metropolitan Aberfoyle Park to Wudinna in the Eyre Peninsula.  Mildura in Victoria and Broken Hill in New South Wales.

In 2000 Chas gave up Sprint Car racing, and took up farming.  He has a farm at Yattalunga where he grows hay.

A South Australian based business, Sprint now has 39 stores including franchises, which are open seven days a week, employs about 200 staff across the network.  the sale went through in May 2016 to Bapcor, which had by then taken over Automotive Brands Group.