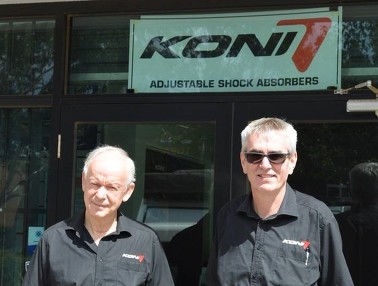 Toperformance Products, a Koni shock absorber specialist, was established in May 1970 at Vermont in Melbourne by Cor Teeuwen, former Koni world-wide export manager who migrated to Australia from the Netherlands with his wife and four children.

The first business was located in Beech St, Vermont. In July of 1983, Toperformance moved to larger premises in Trade Place, Vermont. The business is now at its fourth location, although still in Trade Place.

The company has grown over the years and has distribution (resellers) agents in Darwin, Perth, Brisbane, Newcastle, Sydney, Adelaide, Melbourne, Traralgon and Geelong.

In 1990, Cor sold his Australian business to two employees, Bastian Barendregt and his son in law Ian de Graaf, and a customer Barry Brookes. Bastian retired in 2008, and it was Ian and Barry who sold the company to Bapcor.  Cor died in 2017.

Barry has worked in the motor trade all his working life and ran his own workshop business. “When I heard Cor was retiring, I started asking questions and then Ian and I got together and worked out a way we could take over the business in 18 months, which was 1990,” Barry said.

When Ian and Barry bought the business, Bastian was an existing minor partner. Barry was Toperformance sales and marketing manager and Ian operations manager, while Bastion worked as a Ride Development Engineer.

Ian said the business had morphed over the years. “When I started in 1982, we were selling as many shock absorbers for motorbikes as cars. That was our market; truck and bus was a sideline.

“By the late 1980s motorbikes were decreasing dramatically and Koni stopped making motorbike shock absorbers about 20 years ago. By the mid 90s truck and bus, and 4WDs were the growing areas in the market place.”

Barry said Toperformance was the biggest aftermarket distributor of Koni in the world: “It’s a high-quality brand and one of the smallest manufacturers of shock absorbers,” he said.

The involvement history of Koni in motorsport is long and detailed. Koni had the official supplier contract for the Bennetton and Bar/Honda Formula 1 teams, which provided for the supply of the Koni 2812 F1 race shocks, and the engineering support of the Koni research and development department. The company also had associations with constructors and teams in Formula 3, Formula 3000, GT Racing, Le Mans prototype cars, IRL and touring cars worldwide.

In Australia, teams such as Perkins Engineering, Ford Tickford Racing, Gibson Motorsport, Autopro Racing and many others have used Koni along with cars in Formula Holden, Formula Ford, Nations Cups, Porsche Cup, Marque Sports, Drag Racing, Sports Sedan and others. Although not at present involved in Formula 1, Koni has a presence in international motor sporting events around the globe.

Koni products are well regarded in the 4WD market and the commercial vehicle industry and supplies brands including Kenworth trucks, Krueger trailers, Hendrickson Suspension, Daimler Chrysler, MAN, the Australian Army and others.

Toperformance distributes to the after-market Australia-wide through a network of independent suspension specialists. The company represents the factory as an OE supplier and supplies Mitsubishi and Tickford Vehicle Engineering.

Toperformance staff have direct access to Koni technical and engineering personnel, which permits a smooth flow on information, and facilitates the progress of projects. Since the company started in Australia it has acted as a problem solver and supplier to Nissan, Holden, HSV, Toyota and Ford.

Ian said Koni was not a copy of the original, but a tailor-made product designed to meet a set of demanding standards.

Barry said the growth area in the Australian motor industry was the truck industry. “For companies who want growth, the cheaper and easier way in is to buy the competition, and there have been a few takeovers in the industry, including Toperformance,” he said.

Ian is 61 and said he had been in the business since 1982. The reason for selling was that he and Barry reached a point where they wanted to get some personal life back: “You don’t go on holidays without taking some sort of communication device with you so you can keep track of what’s happening with your work, and I don’t think that’s healthy in the long term.”

Toperformance had as many as 12 employees in the past and ran their own workshop.

The KONI shock absorber range caters for passenger and 4WD vehicles, bus and motorhomes, truck and trailer, and a wide range of motorsport options.

Ian said the bulk of their business is in the truck industry.

“In the car industry it is more of a discretionary spend by enthusiasts who want something better and different from the average shock absorber,” he said. “Koni doesn’t copy the original shock absorber; they design something that is better. And that’s what has helped in the truck market because the truck industry got sick of going through shock absorbers too often. So, you spend some extra money and you get much more longevity.

“We bought the business in 1990 and in the mid 90s interest rates went up to 18 or19 per cent, which caused a few stresses. We survived. We worked.

“Our biggest problem in the 90s was we couldn’t get the shipments here fast enough; the boats stopped coming.”

Barry said they used Kenworth trucks, which Koni has supplied for more than 27 years, as a barometer of the economy.

“In the Global Financial Crisis in the 2000s, Kenworth went from 20 trucks a day to four trucks a day, but it wasn’t all that it seemed with Kenworth. There were some new engine emission laws coming in and sales were boosted as buyers ordered early to beat the new laws.

“We were surprised at how little time they (Kenworth) spent there as their build rate climbed up again reasonably steadily.”

Toperformance supplies Denning, the last Australian bus manufacturer, with shock absorbers and is still involved in a smaller way with Volvo and MAN.

Ian said the fastest seller in the 4WD market was the Toyota 200 series Land Cruiser. “People use that as their tow vehicle when going on their big trip,” he said. “They will go and spend $80-100,000 on a vehicle and then another $40,000 on accessories, part of which is a suspension upgrade because the vehicle can’t carry more than 200kg.”

Barry said it has been estimated that more than one million shock absorbers were sold in the aftermarket to 4WD and truck markets. Koni is at the bottom for volume and the top for quality.

“There’s a bunch of other little brands who would probably be smaller than us, but most people would probably have never heard of them,” he explained.