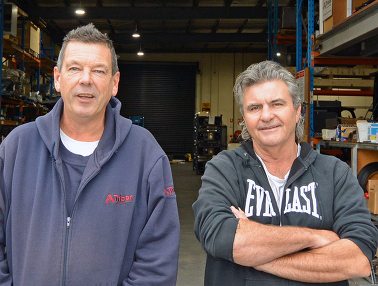 Tricor is a manufacturing and engineering company based in Boronia in Melbourne’s eastern suburbs.

Tricor was established in 1994 by Ian Blackhurst, who answers to “Blackie”, and Michael (Mick) Young. Both men are 56 years-old. Blackie hails from Liverpool in England and did an apprenticeship as a fitter and turner; Mick is a boilermaker with pressure vessel welding certificates. Blackie said the two men had known each other since 1989, and had worked in partnership in the business since 1993.

Tricor started out in the aviation industry and worked on pressure vessels before moving into fabrication and setting up garage workshops.

“We got sub-contracting work; pressure vessels and stuff like that,” Blackie said. “There was plenty of work around. We did work for Ford, TPG, Rheem, Dulux and Qantas. Just fabricating stuff.”

Mick said the business grew through word of mouth: “We depended on people talking to other people; on the quality of our work, and ensuring our customers were getting exactly what they wanted.”

As the company grew, so too did it’s cash flow. In 2009, Blackie and Mick decided to invest in people and products and went into importing and selling a range of equipment described as: “A comprehensive suite of products that encompass the full range of workshop parts. From grease guns to valves, hose reels and pumps, Tricor have introduced hundreds of part numbers that are all very competitive in price and performance. The range includes proven European and American brands as well as in-house design.”

The venture lasted for about five years. Neither Mick or Blackie was enthusiastic about their early venture into product sales. “We went in with no experience,” Mick said.

Tricor fit out between 50 and 70 workshops a year, most are Victorian-based, and fees range from about $10,000 to $300,000. The company do as much of the construction as possible in house to make sure that finishing touches, like welding, are state-of-the-art. Everything from piping to benches, trolleys, gantries and tanks are included in the job description.

“We make sure that the end result is efficient, accessible and well planned out,” Blackie said.